It was a gloomy morning in Grand Cayman, and the tarmac was still wet from the rain that heavily poured the previous night. We grabbed a quick breakfast at a coffee shop, awaiting impatiently for 8 o’clock to arrive.

At the dock, Captain Jon, owner of Slackem Charters, and his First Mate Peri, welcomed us aboard the ‘Keeping It Reel’. The luxurious 62′ Ocean Sport Fisherman vessel was equipped with a spacious air-conditioned cabin, including a galley, 3 state rooms and 3 bathrooms. It was large enough to accommodate our group of 10, and the crew of 2.

Sport fishing is a recreational activity consisting of catching open-water big-game species offshore. It is a very popular activity in the Cayman Islands, considering that the Caribbean has some of the best fishing grounds in the world.

As the sky slowly cleared out, I climbed on the top deck and sat by the Captain. We slowly cruised towards the deep ocean, cutting through awaking waves. The usual calm and turquoise sea was then choppy with shades of dark blues and greys, yet I could see some beautiful clear patches as we passed shallow waters. The rain has stopped, but the clouds reappeared and darkened the sky at the horizon making the view exquisite and the picture serene.

The 7 lines trolled behind the boat at different depths, and everyone was eager to catch a beast.

The sea gradually raised in swells, causing the vessel to rock heavily. I isolated myself in the front corner of the top deck, ignoring my seat neighbor from his ongoing life stories, trying to deal with the disturbance. If only I knew to concentrate on an immobile point in the boat instead of watching the moving sea at the horizon, perhaps I wouldn’t have lost my breakfast in the toilet. 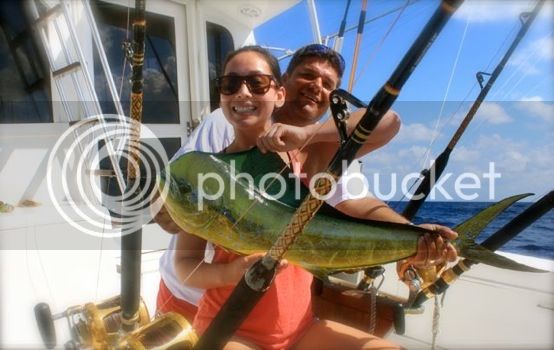 While I tried to stabilize my motion sickness, I laid on the couch in the cabin, starring at the ceiling, I heard the Captain scream: “Fish, fish!”

I immediately jumped off my safe zone and hurried to the deck.

Kayla grabbed hold of the rod in an instant. After sweat and strong efforts, she victoriously brought back the first mahi-mahi onboard.

I went back to my couch and to my ceiling… until I heard the captain once more: “Fish, fish!”

It was a big one.

I was nauseous, experiencing a bad case of vertigo and could barely balance myself on the deck. But what the heck: I haven’t come here just to stare at a ceiling!

I was in, rod in hand, and ready to fight my worthy opponent.

Captain Jon strapped me to the chair. I wanted to strangle everyone for their endless encouragement words that were not helping at all: “You’re almost there!”

Ya right. I could see the line 100ft away! My whole body was shaking, already aching for days.

After sweating the last drop of water I had in my dehydrated body, I saw the end of the tunnel, or rather the tail of the catch. It took 20 minutes, and a load of sweat and swears, but I reeled it onboard, and all by myself!

My seasickness was gone. I was too excited!

Everyone got turns to reel the rods.

On our way back, the sky growled and the thick black clouds released themselves. We sheltered ourselves comfortably inside the cabin and shared our experience at sea.

When we returned to the dock, Captain Jon offered to filet our fishes. I couldn’t resist and devoured a big raw piece. I was followed by everyone else.

We thanked our crew and left with our catches filling up our ziploc bags.

It was an amazing deep sea fishing experience. Captain Jon and his First Mate Peri were very helpful and knowledgeable. Not only did their patience and work ethic made us feel very safe and comfortable, but their passion for the fish and the sea, and their willingness to go the extra mile made this day at sea a memorable experience.

That day, we caught 10 mahi-mahis.

And not that I want to brag, but I got the biggest one. ;)