Aaron Hadlow doesn’t hail from a land of sunny windswept beaches. He’s from England, but that hasn’t stopped him from dominating the sport of kitesurfing, and taking home the crown at the Red Bull King of the Air in Cape Town, South Africa.

Kite surfing is a relatively new sport, in which riders (kite boarders) use large power kites to propel them across the water on a small board similar to a wakeboard or small surf board. Freestyle kitesurfers can also perform amazing aerial tricks and jumps with the aid of their kites.

Aaron got involved in kitesurfing as a child, and confesses to have always been a sports fanatic; his father, after all, was a watersport enthusiast. Aaron recalls flying kites on the beach with his father when he was just ten-years-old, back in 2000. A year later, he hopped on a board and began perfecting his skills. During winter months, he would escape England and head to South Africa to train. Soon enough, with enough practice, he began competing. At only 14 years old, Aaron was competing at a world class level and won his first Professional Kite Riders Association Championship in 2004. 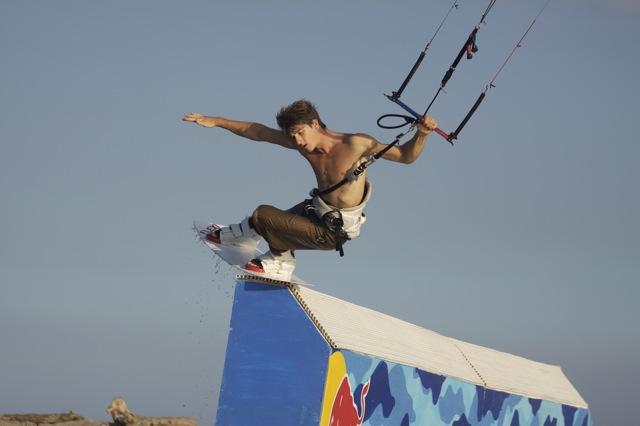 For the next several years, Aaron was at the top of his game, innovating many new techniques that have pushed the sport to new heights. Then, after a particularly rough season of competition in 2009, he decided to take time off from kitesurfing and worked with his sponsor company, FlexiFoil, for the next two years to create better boards and kites, known as Hadlow by Flexifoil Kiteboards.

However, the call of the wind and waves eventually found him again. Aaron reentered the sport in 2012, but shortly after his reemergence, he suffered injuries, which put him out of commision for a full year. In 2013, he eased his way back into competition and once again, became a fierce competitor in the world of kite surfing.

On the 15th of February, Aaron showed his competitors what it means to be the King of the Air. With an impressive array of big tricks and consistant high level riding, Aaron won the event over the defending champion, Kevin Langeree. Third place went to Jerrie Van de Kop.

About his victory at the Big Bay, South Africa event, Aaron says,

“Once I went out there I was just full of adrenaline and managed to pull some pretty sick moves so I’m really happy now. The atmosphere here at Big Bay is like nothing else – the crowd loves it. It’s the one event in kiteboarding that really is for kiteboarding and I’m so happy to be on top!”