Daniel Ennett lost both of his arms and legs to meningitis when he was only five years old, but that hasn’t slowed him down. Aside from living with this disability, Daniel is pretty much a typical 20-year-old Canadian college student: he likes to play video games and party with his friends, but now he will also be taking on some bigger adventures.

A year ago, Daniel met Fredrich Kroetsch of Open Sky Pictures. Now the two are working together to make the television series “Invincible,” which follows Daniel’s own adventures, as he engages in new activities and explores the challenges and triumphs people with disabilities face.

While filming the series, Daniel has had the opportunity to try skiing, trail riding, scuba diving, rifle shooting and sailing, as well as a host of less extreme activities, like dance and painting. However, his favorite experience so far has been sailing. 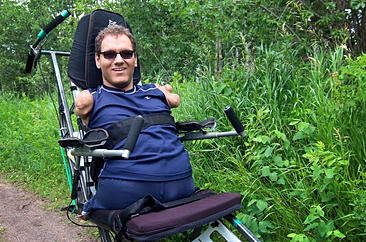 “There’s a lot of work that goes into normally sailing a boat – taking the sails and being able to control the rudders – and being able to do that from a stationary position was pretty empowering,” Daniel stated.

He does acknowledge some of the inherent risk of the activities he partakes in, especially for a person living with disability. Yet, he keeps a pretty cavalier attitude about things.

“I’m not scared of a whole lot, mainly because I agree to it and then I regret it as I’m doing it, so it’s a little too late by then.” Recently while scuba diving, he also explained, “It’s a very surreal experience, especially because I don’t have a lot of control down there. I have no way to properly equalize because you have to plug your nose to do that, so I was relying on someone else to help me equalize, which was super sketchy.”

Regardless, Daniel is willing to try just about anything, although skydiving had to be postponed due to the weather in Alberta. In the meantime, he looks forward to trying it out in the summer, and continues to be an inspiration to those around him. Everyday, he shows how people with disabilities can overcome their daily difficulties to experience amazing adventures.

You can watch “Invincible” on Telus TV in western Canada, or view the series on the Internet here.